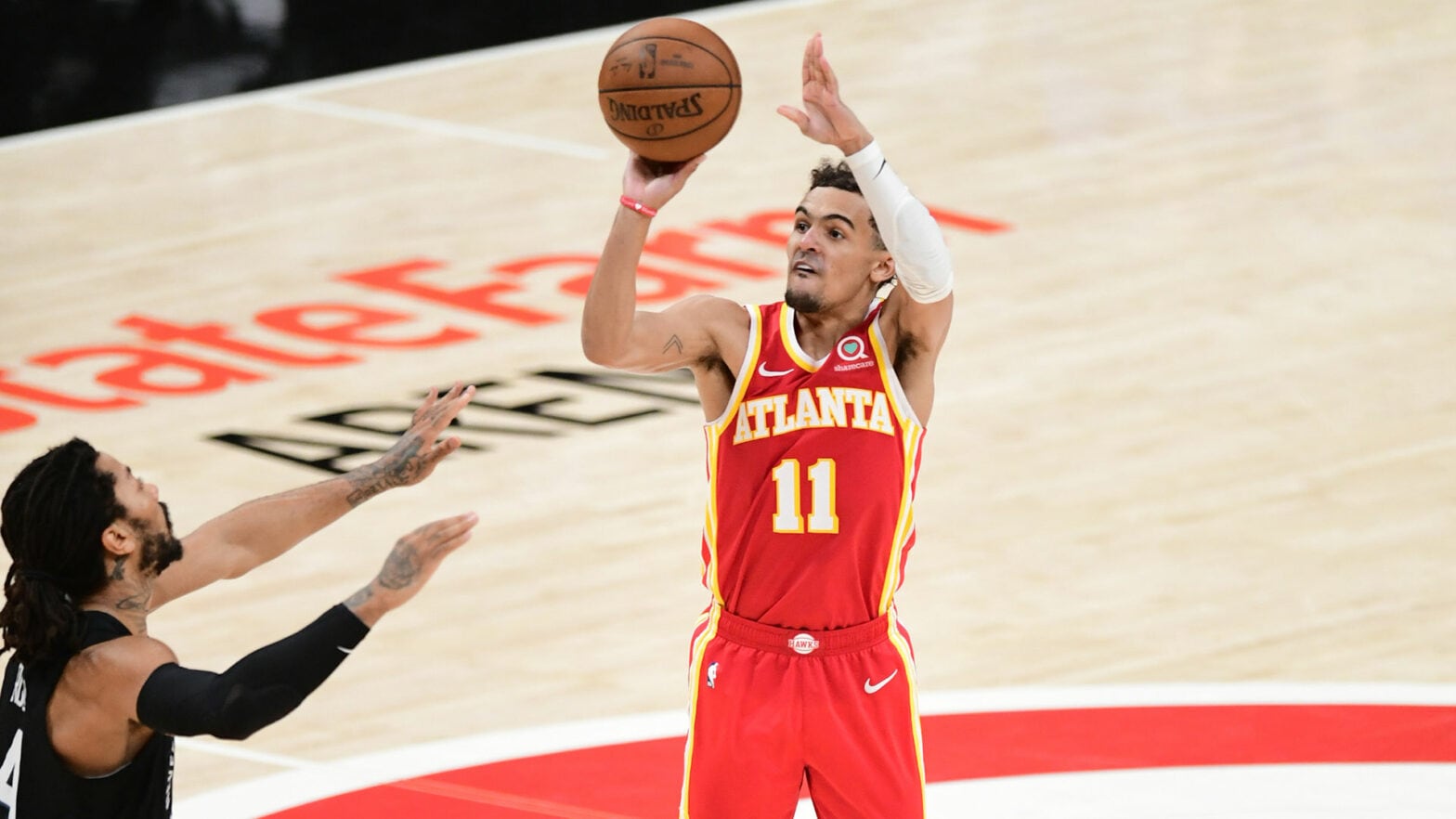 • Playing in front of their largest crowd of the season (15,743), in their first home playoff game since 2017, the Hawks earned a 105-94 win over the Knicks to take a 2-1 series lead. Trae Young led a balanced Atlanta offense as he was one of seven Hawks in double figures with 21 points and 14 assists.

• The Hawks took control of the game with a 22-3 run in second quarter. The Hawks went from trailing by three (39-36) with 7:19 left in the quarter to leading by 16 (58-42) with 30 seconds to play. During that stretch, the Hawks shot 9-13 from the field and 4-5 from beyond the arc; John Collins and Trae Young led the way with five points each, but six players scored during this burst, compared to one for New York.

• Through the first three games of the series, Trae Young is averaging 27.7 points (10th among all playoff players) and 10.3 assists (4th). Young joins Luka Doncic and Damian Lillard as the only players to rank in the top 10 in both categories in the postseason.

• After being inserted into the starting lineup in the second half of Game 2, Derrick Rose started Game 3 and posted a game-high 30 points in the loss in his first playoff start since May 14, 2015. Between the regular season and playoffs, Rose has started four games for the Knicks. In those four games, he has averaged 19.8 points, 6.8 assists, 3.3 rebounds and 1.3 steals while shooting 56.1% from the field, 61.5% from 3-point range and 87.5% from the free throw line in 34 minutes per game. 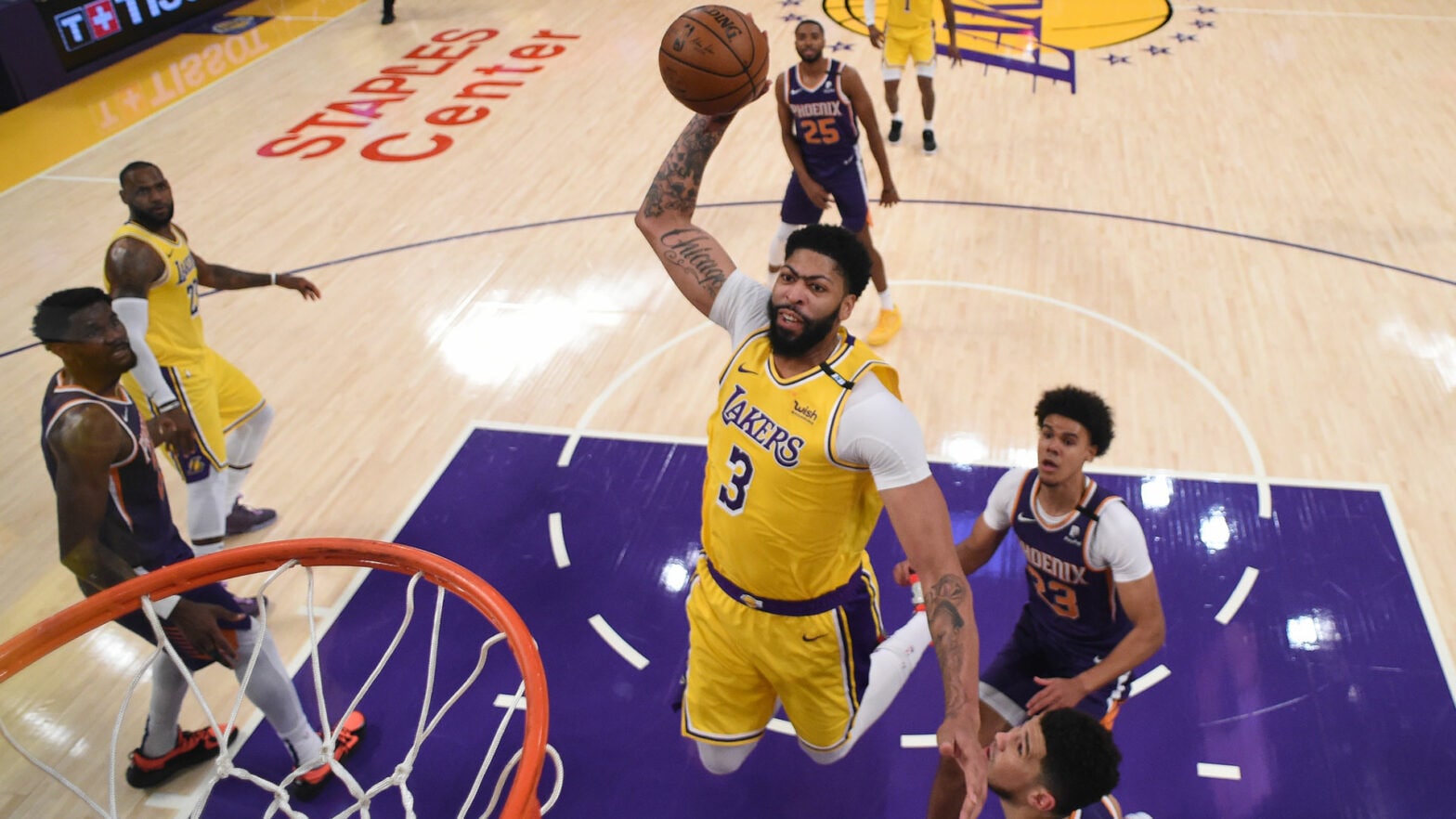 Anthony Davis has scored 34 points in each of the past two games in this series – both Lakers’ wins.

• In each of his past two games, Anthony Davis has played 40 minutes, scored 34 points, attempted 36 shots between field goals and free throws combined, and grabbed at least 10 rebounds. And the most important stat of them all, got two wins to help the Lakers take a 2-1 lead in the series.

• Through the first three games of the series, the team that wins the points in the paint battle has won all three games. In Game 1, the Suns outscored the Lakers 52-44 in the paint; in Game 2, the Lakers had a two-point edge, 42-40; and in Game 3, the Lakers dominated the paint 58-38. In Game 3, Anthony Davis (20) and LeBron James (16) nearly matched the Suns entire team.

• After scoring more than 30 in each of his first two career playoff games, Devin Booker had his roughest game of the series in Game 3 as he finished with 19 points on 6-19 (31.6%) shooting from the field, along with six assists and four turnovers. With Chris Paul limited (6.7 ppg, 6.3 apg) due to his shoulder injury, Booker will be called upon to carry more of the Suns offense. 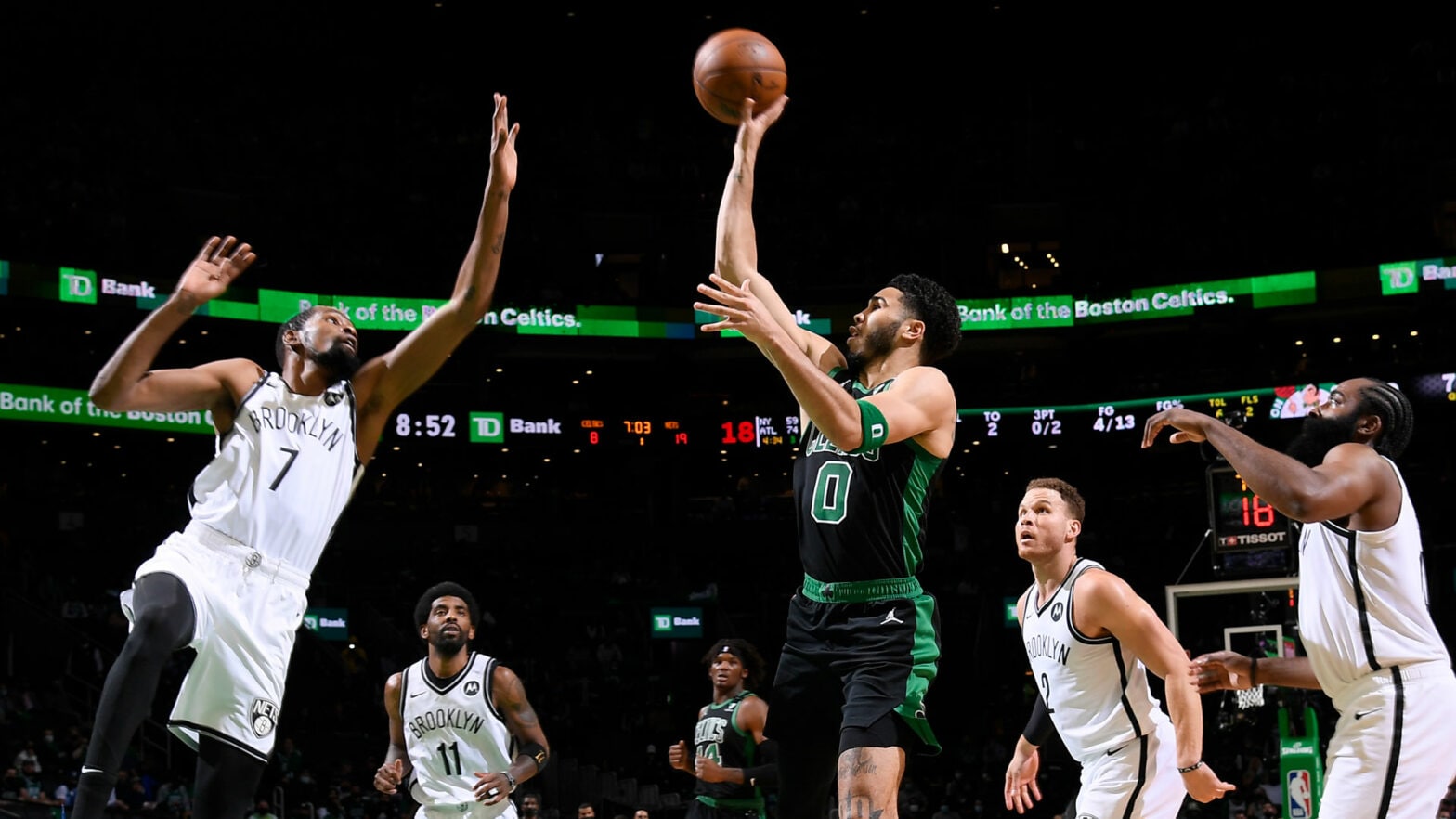 Jayson Tatum has four 50-point games in the past seven weeks.

• On a night when Brooklyn’s Big Three combined for 96 points, Boston needed every one of Jayson Tatum’s 50 points to secure the 125-119 win and pull to 2-1 in this series. Between the regular season, play-in tournament and playoffs, Tatum has an NBA-high four 50-point games in 2020-21 – and they have all come in the past seven weeks. Tatum joined John Havlicek, Isaiah Thomas, Ray Allen, Sam Jones and Bob Cousy as the only Celtics with a 50-point playoff game.

• The 96 combined points from James Harden (41), Kevin Durant (39) and Kyrie Irving (16) in Game 3 against Boston matched the highest combined total for the Brooklyn Big Three in their 11 games on the court together. The trio’s first 96-point game came on Jan. 20 against Cleveland. The Nets lost both of those games

• James Harden finished with 41 points and 10 assists for the Nets, joining Portland’s Damian Lillard as the only players with a 40-10 game in this year’s playoffs – both came in losses. Since 1984, only LeBron James (5), Michael Jordan (3), Russell Westbrook (2) and Lillard (2) have multiple 40-10 playoff games.

• Kevin Durant was the primary defender on Tatum in Game 3 for a team-high 5:43 (39.4% of Tatum’s matchup time) and held Tatum to nine points (18% of his total) while allowing only six field goal attempts and no free throws. The Nets tried five other defenders on Tatum for at least a full minute of matchup time as they had very little success in slowing Tatum down. In 7:36 of combined matchup time against Kyrie Irving, James Harden, Nicolas Claxton, Blake Griffin and Bruce Brown, Tatum scored 36 points on 12-23 shooting from the field, 4-8 from 3-point range and 8-10 from the free throw line. 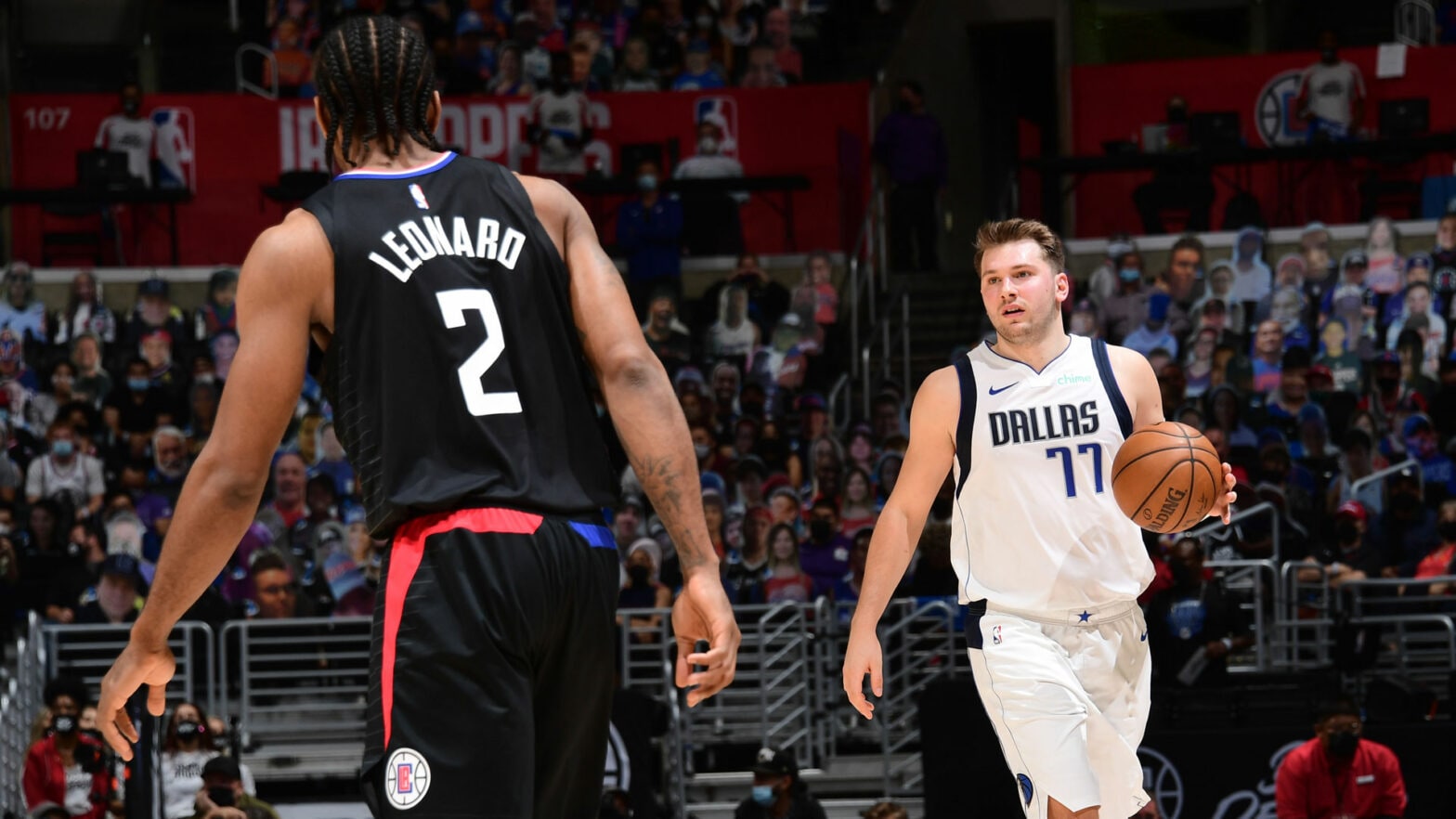 • After falling behind by 19 points in the first quarter of Game 3, the Clippers were staring at an 0-3 series deficit and the history that no NBA team has ever won a series after trailing 3-0. With their season on the line, LA responded by outscoring Dallas 107-78 the rest of the way, with the All-Star duo of Kawhi Leonard and Paul George leading the way as they combined for 65 points on 24-35 shooting in the win.

• The Mavericks lost Game 3 despite shooting 20-39 from 3-point range. Since 1984, the Mavericks are the only team to lose a playoff game while making 20 or more 3-pointers on 50% shooting or better.

• Luka Doncic has scored 300 points through his first nine career playoff games. The only other players with at least 300 points scored in their first nine playoff games are Michael Jordan and Kareem Abdul-Jabbar with 325 points each.