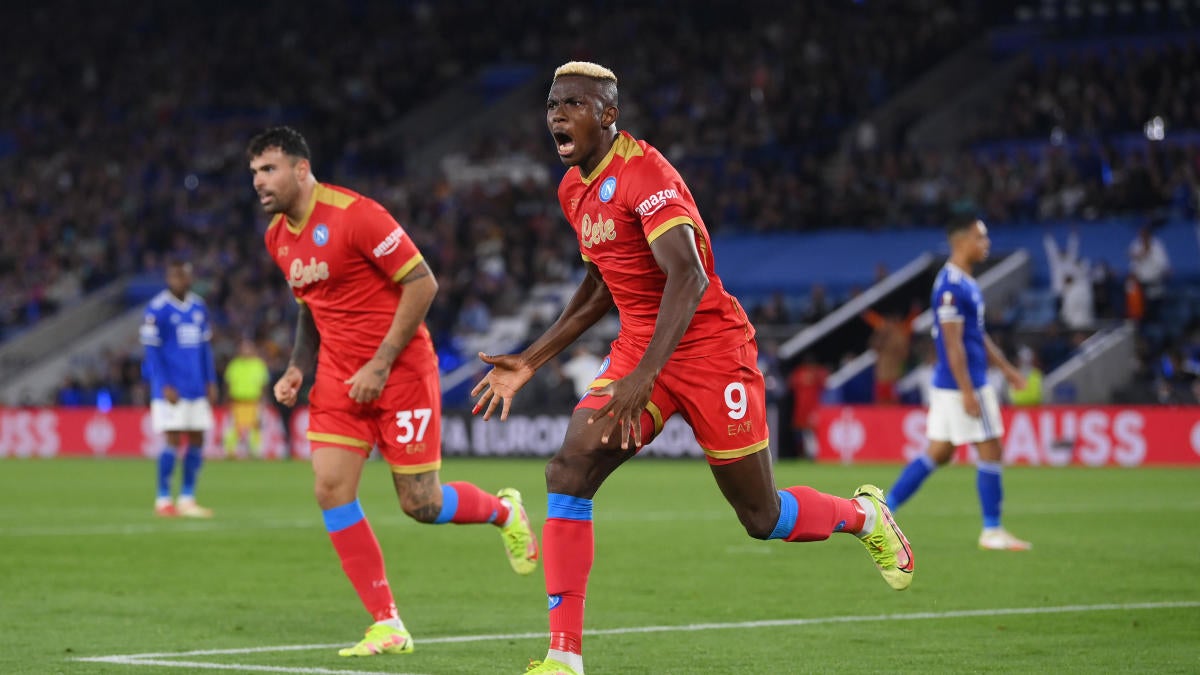 The Europa League made its long awaited return with 15 games featuring some of Europe’s top clubs, rising forces from across the continent and unheralded teams all looking to reach the final in Sevilla in May. As always, you can catch all of the Europa League action on Paramount+.

West Ham began their first-ever group stage campaign in impressive style with a 2-0 win away to Dinamo Zagreb. Real Betis came from two goals down at home to Celtic to win 4-3, while a catastrophic error from goalkeeper Thomas Strakhosa handed Galatasaray a win over Lazio. Meanwhile Napoli fought back from two goals down to draw 2-2 away to Leicester City whilst French sides Lyon and Monaco emerged victorious in the day’s later games.

In the Europa Conference League, Tottenham’s campaign began in disappointing fashion as they had to fight back to earn a 2-2 draw in Rennes. They were not the only big team to struggle with Bundesliga side Union Berlin losing 3-1 at Slavia Prague though Roma survived an early wobble to beat CSKA Sofia 5-1.

Game of the day

Real Betis 4, Celtic 3: There’s clearly something in the water in Seville. After four penalties in the Champions League tie between Sevilla and Red Bull Salzburg on Tuesday, the first half of Thursday’s game at the Estadio Benito Villamarin brought as many goals as what looked like being a shockingly excellent start to the group stages for Celtic ran aground.

Albian Ajeti and Josip Juranovic had the visitors two goals up in 27 minutes, but they were blown away in 21 thrilling minutes either side of halftime, Juanmi hitting a brace while Juan Miranda and Borja Iglesias also found the net. The pick of the goals was Betis’ second, veteran winger Joaquin pinging a gorgeous pass in behind two Celtic defenders for Iglesias to square for Juanmi.

To their credit Celtic did not give up the ghost and Anthony Raltson’s header in the 87th minute brought hope even if the chance for an equalizer never came. With Bayer Leverkusen victorious in the other match in Group G it will take quite an impressive run of results for the Scottish giants to make it to the knockout rounds.

Goal of the day

Take your pick from plenty. Karl Toko Ekambi’s might have been the best pure finish of the night, a glorious curling strike from well outside the box, while Mesut Ozil produced one of his customary “how did he score from there” goals for Fenerbahce against Eintracht Frankfurt.

The Leicester City vs. Napoli tie provided plenty of quality as well. Ayoze Perez’s thundering strike at the back post was all the better for how it cannoned off David Ospina’s legs. Victor Osimhen’s double lob, first over the defender and then over Kasper Schmeichel, eclipsed that and maybe should be the winner.

Even Thomas Strakhosa’s bizarre own goal for Lazio to hand three points to Galatasaray needs to be seen to be believed.

But in terms of significance none quite matches Declan Rice‘s outstanding strike to earn West Ham three precious points in their first ever European group stage game. Spotting and intercepting a pass just inside his own half, the England international started moving and kept going and going and going. Michail Antonio was making the run in space down the right but Rice simply did not need him, thumping the ball low between Dominik Livakovic’s legs.

His first European game for West Ham. His 150th in all competitions. There couldn’t have been a better way to mark it.

Player of the day

Watching Mario Gotze on Thursday, you could be forgiven for thinking it was 2014 all over again. The PSV forward threw it back to the time when he was the most exciting youngster in world football with a wonderful display in his side’s 2-2 draw with Real Sociedad. It started well enough with a poacher’s finish as he snaffled the rebound from Noni Madueke’s shot to fire the Dutch side into the lead.

But really this was all about his assist for Cody Gakpo’s equalizer. One nutmeg. Then another. Then the pass played in just the right spot for the young winger to fire home. This was Gotze rolling back the years, a reminder that even if he never quite pushed on from the wonderkid who won the World Cup seven years ago he was still an exceptional player and might still be.

However, he’ll have to settle for second place behind the outstanding Osimhen, who proved himself to be the complete package as he scored both goals to earn Napoli a crucial 2-2 draw away to Leicester City. In the first half, the Nigerian’s pace was so devastating that Brendan Rodgers felt he had no choice but to withdraw Jonny Evans. Caglar Soyuncu had no more luck however.

First, the Leicester defense were beaten by a brilliant team move that ended with Napoli’s No. 9 lobbing the goalkeeper. Then 18 minutes later, Osimhen rose above the Leicester defense, pinning Soyuncu firmly and fairly with his elbow before guiding a well directed header beyond Schmeichel. Napoli had seemed bound for defeat but their young striker saved them in outstanding fashion.

Meanwhile, in the Conference League …

UEFA’s new third-string competition had been designed with the aim of giving clubs from lesser leagues the chance to compete for continental silverware, but there had been those, including in this column, who had assumed that the big boys would ultimately end up finding the Conference League to be something of a breeze. That may yet prove to be true, but it certainly was not on Matchday 1, where Tottenham had to overcome an almighty scare to draw with Rennes.

In truth, Spurs would have known that Roazhon Park would be a tough place to travel with the Ligue 1 side having won two of their three games against English opposition at home before Thursday night. That might well have been three from four had Pierre-Emile Hojbjerg not struck late on.

It was a tough night across the competition for representatives from the big leagues, with Union Berlin falling to a 3-1 defeat at Slavia Prague where Jan Kuchta and Ivan Schranz struck in the final 10 minutes for the Czech side. Even Roma did not have things all their own way, beating CSKA Sofia 5-1 but only after Irish midfielder Graham Carey, formerly of League One side Plymouth, hammered home a fearsome strike past Rui Patricio from a tight angle to give the Bulgarian side the lead.

There’ll be time for one more round of fixtures before the international break with the Europa League and Conference League’s second round taking place in a fortnight’s time on Sept. 30. You can catch all the action on Paramount+.