DePaul women’s basketball seniors are ready for their last… 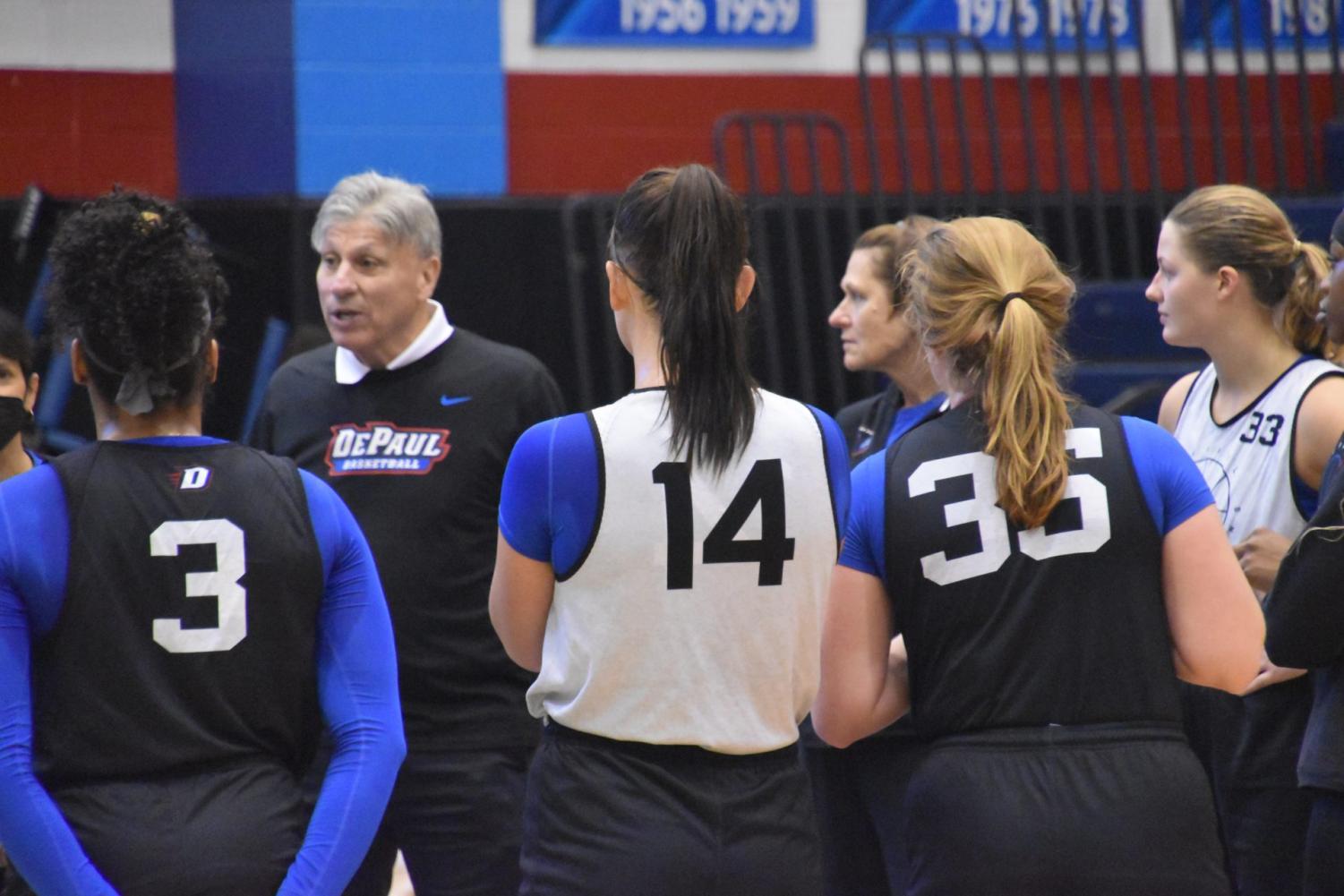 The DePaul fight song filled the air of women’s basketball head coach Doug Bruno’s spacious corner office in the Sullivan Athletic Center — his phone was ringing. It was a prospective athlete waiting to hear the reasons she should come to DePaul. This season is about to be her answer.

If there’s any one person or group that is excited about the upcoming DePaul basketball season and the return of fans — it’s Bruno and his 2021-22 team.

After a gruesome run of tournament mishaps, pandemic woes and one of the most dominant women’s basketball programs re-entering the Big East Conference (the University of Connecticut), Dee Bekelja and Deja Church want another shot. The last dance.

“With Covid and everything, our games got cut and we didn’t make the NCAA tournament,” fifth-year senior Deja Church said. “Not really going out on the best note, so I decided to come back and do it all over again.”

Church recorded 13.3 points and 5.2 rebounds per game last season with the Blue Demons.

“It was definitely tough on everybody,” fellow fifth-year senior Dee Bekelja said. “The situation last year was not ideal, it was not fun. Our parents couldn’t come to the games. But, I think that influenced a lot of people to stay for their fifth year because you want to end it on a good note.”

Bekelja and Church are back for their fifth years, while the team’s two leading scorers from last season — Lexi Held and Sonya Morris — are going into their senior seasons.

This is something Bruno emphasized is a vital part of his team, saying “you can’t replace experience in college coaching.”

The schedule for the season includes six tournament teams from the previous year, with an asterisk on Arizona, the runner-up from last year’s NCAA tournament.

This schedule, however, is nothing new for Bruno and his philosophy around competition.

“If you’re gonna ask your players to be competitive, then you as a coach must be competitive,” Bruno said. “I’m so ‘anti-playing-soft-schedule.’ This year has a little bit tougher look to it. But, generally speaking, this is what we do every year.”

To prepare themselves for the season, the Blue Demons are working hard. They’re bringing “energy and enthusiasm” to practice on an everyday basis, according to Bruno.

Bekelja and Church claim the team put an exclamation mark on defense and rebounding this offseason too, which on paper, looks like they could use it.

The Blue Demons allowed 78.4 points per game last season. Their opponents shot 47.9 percent from the field. And, they allowed 41.7 rebounds per game. All of these marks ranked last in the conference.

However, the stigma surrounding the “lack of care” the Blue Demons have on the defensive side of the ball is misleading, according to Bruno.

“Because Coach Bruno loves to score the ball,” Bruno said. “It can often be misconstrued by observation that we don’t care about defense here.”

“There are two ways to play the style we play,” Bruno said. “One way is to let them score. The second is to try to defend. But, if we defend in a traditional fashion, then what happens is the game can get slowed on our defensive side of the ball. If we play a risk-reward defense, which is a gambling defense, it forces the opponent to speed up.”

DePaul led the Big East in steals with 11.1 per game last season. They also converted the largest turnover margin (+7.0) of any team in the Big East. Held recorded 75 steals last season, the fifth most steals by any player in the nation.

All these results are true outputs of a “risk-reward” defense that gave the Demons the fourth-best win percentage and the second-best offense in the conference last season.

The goals for the team this season are high, but the way in which they achieve them has to be done while having fun, according to Bekelja and Church.

“I think the goal for the team is to have fun,” Church said. “We want to dominate our non-conference schedule. We want to finish at the top of the conference. And most importantly, win the Big East and make the [NCAA] tournament.”

“Emphasis on fun, because I think we play our best ball when we’re having fun,” Bekelja said.

Now, fans are able to watch the team have fun in person. Not just because Covid-19 protocols permit fans at games, but because the team will be playing all their home games this season at Wintrust Arena for the first year ever.

The Blue Demons played there multiple times before and have plenty of fond memories doing so — like Chante Stonewall hitting a go-ahead shot to beat Marquette in the 2019 Big East Championship.

But now, the team is excited to play all of their games at Wintrust Arena, where the Chicago Sky just won their first WNBA Championship on Sunday.

Church connected with one of the Sky players, Lexie Brown, to encourage her to keep giving off “good energy” for the Blue Demons to use when their season starts.

Now, the table is set. The players are back, the schedule is out and the Blue Demons are hoping to get back to the NCAA Tournament.

“I’m excited about the possibility of redemption,” Bruno said. “I want to have these players prove to themselves that the group here is the one that won 12 out of 14 last season.”