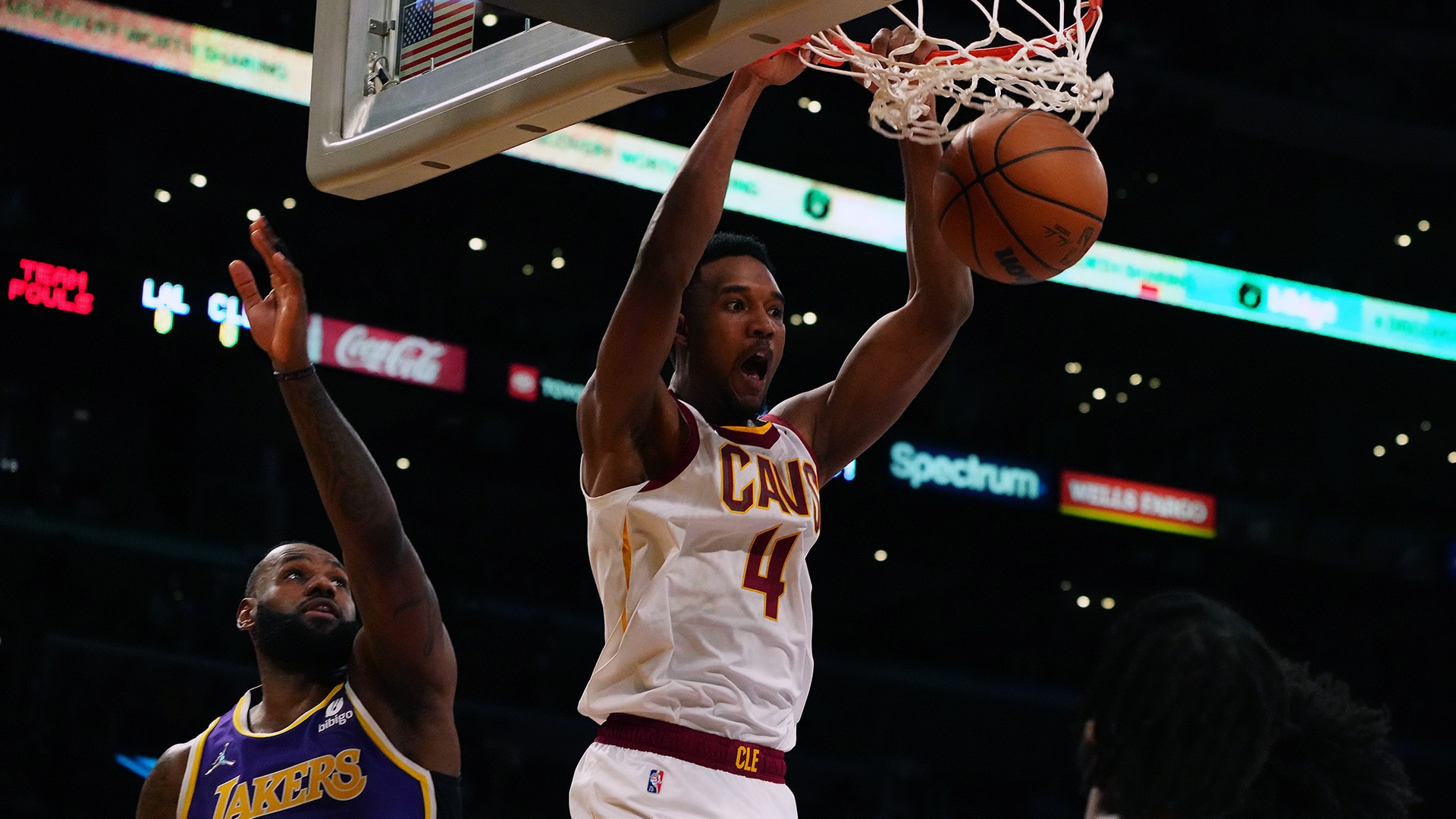 Evan Mobley impressed with 23 points and six rebounds in Cleveland’s loss to the Lakers on Friday.

When he successfully contested LeBron James’ shots, Cleveland Cavaliers rookie forward Evan Mobley maintained a stoic expression. He kept the same look whenever James drained a shot or set up an open teammate.

Other NBA rookies may have become overwhelmed when facing the Los Angeles Lakers’ star. Or they may have become intent on proving a point against one of the NBA’s best players. Not Mobley, whose even-keeled demeanor and obsessive competitiveness explains why the Cavaliers have strongly fallen in love with their No. 3 draft pick.

“He’s going to be a damn good basketball player in this league,” James said.

James did not just say those words out of encouragement. James said it with authority.

Only two years ago, Mobley led Rancho Christian High School to a CIF Southern playoff win against Sierra Canyon where James’ son, Bronny, plays. Then one year after starring at USC, Mobley squared off against James in the Lakers’ 113-101 win over the Cavaliers on Friday at Staples Center. Then, Mobley scored a career-high 23 points on 10-of-16 shooting along with six rebounds. Though James eclipsed Mobley with 26 points, James shot less efficiently (10-of-22) and grabbed fewer rebounds (three).

“Cleveland has a good one,” James said. “They’ve done a good job over the years in the Draft, I’ll say.”

James said those words while bearing a sly grin. Just over 18 years ago, James made his rookie debut with the Cavaliers. Though he broke the franchise’s heart by leaving for Miami in 2010 as a free agent, James returned to Cleveland four years later and delivered the franchise its first ever NBA title in 2016.

Another nice night for @evanmobley in LA 👀

No, Mobley is not expected to become “The Chosen One” or “The King” as James did. But in only six games, the Cavaliers (3-3) believe they have drafted another transformational player that can lift the franchise. Part of the reasoning? On a big stage, Mobley put on a star performance without trying too hard to show that he is one.

“These moments aren’t for everybody,” Cavaliers coach J.B. Bickerstaff said. “That’s why I think Evan is special. There was no flinching. There was no back down. It was, ‘Go play to win.’”

No wonder Mobley made little about this week against the Clippers and the Lakers in L.A. for the first time since his freshman season at USC. He did not seem consumed with the celebrities that watched him. Or that Trojans coach Andy Enfield sat courtside. Or that Mobley often matched up against James and Anthony Davis.

He seemed more consumed with the Cavaliers squandering an 11-point lead and scoring only 16 fourth-quarter points on 4-of-18 shooting.

“I try to be even keel and not let my emotions get too amped up,” Mobley said. “That’s how you make mistakes.”

Mobley has made few of them. He has recorded two double-doubles in six games. He leads all rookies in blocks and ranks fifth overall (10). And the Cavaliers have become encouraged with how he has backed up his confidence with strong work habits.

“I feel like I’m getting adjusted to the NBA pretty fast,” Mobley said. “I’m catching on to a lot of things. I feel like as I play more and more games, I’m going to get better and more acclimated. I feel like I’m ahead of schedule so far.”

“He’s one of the better defensive players already, and we’re just two weeks into the season,” Cleveland forward Lauri Markkanen said. “He’s calm and poised. He’s going to do what the defense gives him. He’s a good playmaker for his size. He can do a lot of different things. We trust him to make good decisions in the game and get us some scoring. He has all of our teammates’ trust.”

The Cavaliers already anticipated Mobley would offer these qualities after seeing him become the first player in USC history to sweep the Pac-12 awards in conference, freshman and defensive player of the year honors. Mobley also became the first player in Division I college basketball to sweep the conference awards since Davis did nine years ago during his lone season at the University of Kentucky.

They gained an extra appreciation for Mobley once they saw what makes him tick up close. Consider last summer when the Cavaliers’ coaching staff came to Los Angeles to work with Mobley in the offseason. Bickerstaff had Mobley complete conditioning and shooting drills that Bickerstaff described as “tough.” Mobley passed the test.

“He would not stop until he got it done,” Bickerstaff said. “That just resonated with me about who he is. You see it time and time again the more that you’re around him. He loves the competition. He aims for greatness.”

The Cavaliers saw another window into that competitive spirit when Mobley played against the Lakers. How? By playing as if they were any other team.

“That’s why you don’t see him riding the emotional rollercoaster that we talk about,” Bickerstaff said. “He just prepares to play the game and do whatever it takes to help our team win. When you approach the game that way, all the distractions and the clutter aren’t in your mind. All you’re thinking about is this game and this moment. That allows you to play freely.”

All of which allowed Mobley to give James another strong impression of his game and his potential.

Mark Medina is a senior writer/analyst for NBA.com. You can e-mail him here, find his archive here and follow him on Twitter.