How I voted players to NBA’s 75th Anniversary Team – NBA.com

How I voted players to NBA’s 75th Anniversary Team…

The greats of the game from yesterday and today converge throughout NBA history as we begin the league’s 75th season.

The NBA does not have its own Hall of Fame.

Halls of Fame historically do not dis-enshrine their members.

Those were my two overriding thoughts when I was filling out my ballot for the NBA 75th Anniversary Team, and they ultimately determined the players for whom I cast my votes.

This latest project to celebrate the league’s diamond anniversary was an update of what it did in 1996 to commemorate turning 50. There had been previous all-time NBA teams before, too – a 25th anniversary squad in 1971 that featured 10 players, followed a decade later by a 35th team of 11 players.

By 1996-97, all 11 of those legends still were easy choices for the 50 Greatest list voted on by a panel of 50 players, coaches and media members. Thirty-nine more made that list, and it didn’t water down the “wow” factor one bit. In fact, it turned the celebration at All-Star Weekend in Cleveland into something fantastic.

This was a Hall of Fame meets “Night at the Museum,” the game’s history come to life and hanging out in downtown Cleveland and at the Cavaliers’ arena. Of the 50, 47 were there. The three who weren’t: Pete Maravich, who had died in 1988 at age 40; Shaquille O’Neal, who was nursing a sore knee, and West, who reportedly was ill.

Otherwise, it was an NBA time machine. At a Friday afternoon media availability, you could see Mikan chatting with Michael Jordan, Baylor laughing with Charles Barkley. A 20-year-old Kevin Garnett, O’Neal’s replacement on the West’s All-Star roster, stood in awe near Wilt Chamberlain as he regaled a throng of reporters with stories and outsized opinions on anything. (I got in a picture unintentionally photo-bombing Wilt that I still use as my Twitter avatar @AschNBA.) 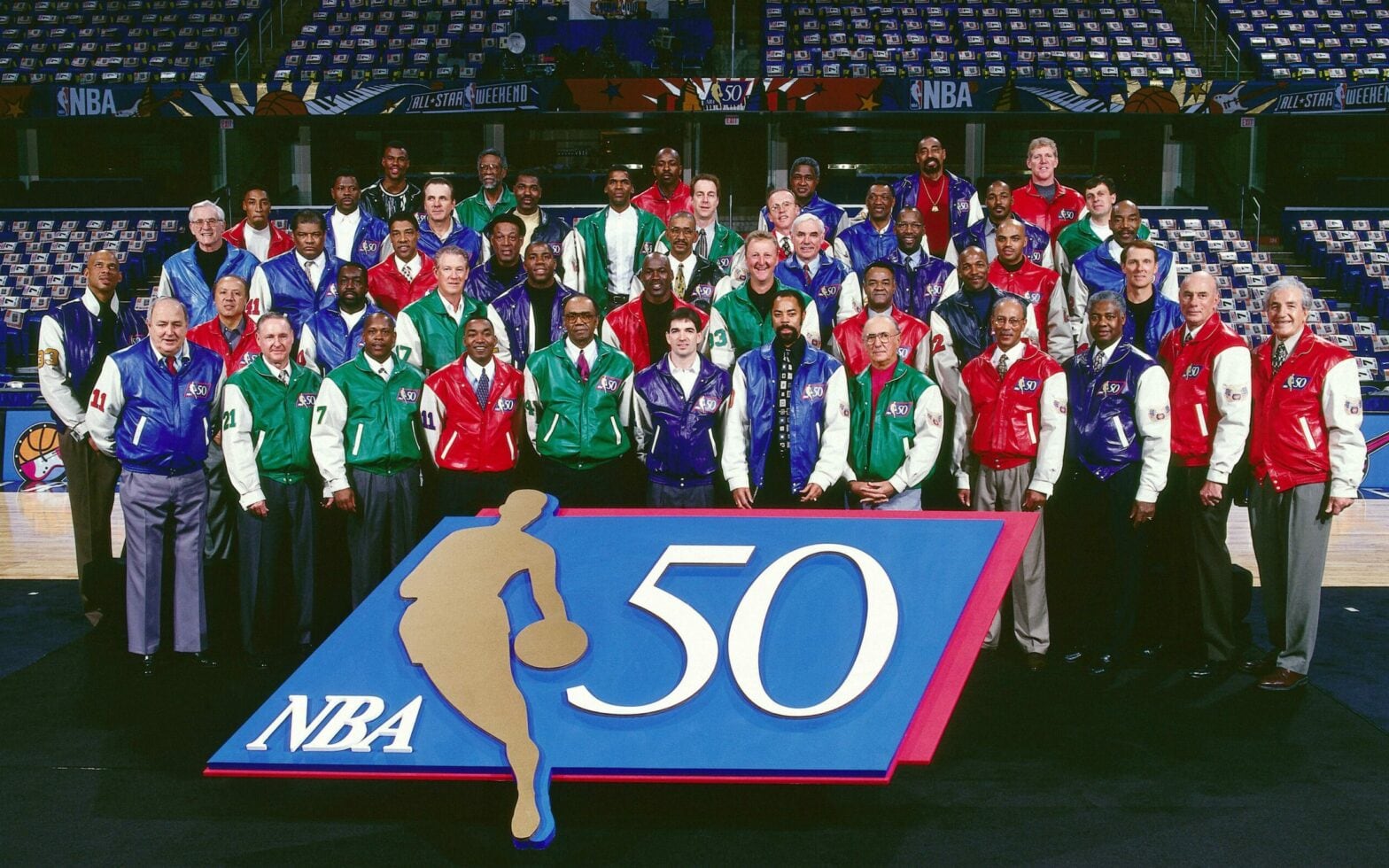 Legends sought out legends for autographs, carrying around a special coffee-table book commissioned for the event. It felt like Babe Ruth and Walter Johnson mingling with Willie Mays and Sandy Koufax, telling tales with Ken Griffey Jr. and Greg Maddux. During a halftime ceremony on Sunday, they all took the court, wearing brightly colored leather letterman’s jackets as members of the NBA’s dreamiest of dream teams.

That weekend and the surreal presence of all those great basketball players, spanning generations, in one place, etched itself in my head. It was unforgettable and deserved to stay so. Just as the new 75th Anniversary
Team would be. So as soon as I got over feeling flattered and humbled to be invited this time onto the voting panel, I saw the challenge.

How I reached a verdict on 75 players

We were instructed to fill out our ballots however we saw fit. We could start from scratch and identify the best 75 players as each of us defined them. We could stick with the 50 Greatest from 1996 and add 25 more. We could do anything in between, as long as we submitted 75 names by the league’s deadline.

That’s when the Hall of Fame concept came to me.

Look, the Naismith Memorial Basketball Hall of Fame in Springfield, Mass., is terrific and the shrine where the game’s greatest belong. It cuts across professional and amateur basketball, men and women players, foreign and domestic stars and contributors, and so on. There actually is something notable – a game-respects-game atmosphere and definitely an air of inclusion – to seeing the likes of Magic Johnson, Carol Blazejowski, John Wooden, Maurice Stokes, Sergei Belov, Lenny Wilkens, Sheryl Swoopes, Hakeem Olajuwon and Meadowlark Lemon honored in one place.

But that 50 Greatest group has loomed large over the NBA since it was named. In essence, it was a super shrine, virtual rather than brick and mortar. The best of the best, Hall of Famers all but especially so. And worth preserving.

To do that, it meant that list – and this new list – had to be more than snapshots from the month and year in which they were voted. Dropping players from the first one would mean that, 25 or 50 years from now, great players who made this group of 75 could get jettisoned, too.

For the prestige and honor to endure, that one and this one had to last. That’s when I decided I had to keep the first 50 intact and add 25.

Besides, the prospect of tossing overboard one or two, or even four or five, great players from the 50 seemed harsh. What, we’re going to tell a Hall of Famer – or his surviving family members, since many of them now are gone – that he was good enough then but not good enough now?

If it was a couple guys, they’d feel singled out and embarrassed. If it was a half dozen or more, then there would be a risk that recency bias was taking over, tilting the new team disproportionately toward players who built their reputations over the last 25 years.

C’mon, I’ve covered the league in one role or another for more than 40 years and, even going back another 10 years as a young fan, I never saw Paul Arizin, Dolph Schayes, Mikan, Pettit, Cousy or a half dozen others play. With current and recently retired players voting along with some less-seasoned media folks, I started feeling protective about some of the stars of the 1950s and 60s, who laid this league’s foundation before high-definition television coverage.

Sure enough, when one prominent NBA writer published his selections a week or two ago, he had dropped nine of the 50 Greatest, all of whom played in the league’s first two decades.

Big no to that. If this list was going to mean anything, then that list had to mean something. Also, respecting the 50 men who made the 1996 list meant respecting the opinions, wisdom and eye-witness testimony of the 50-member panel who selected that crew.

Dominque Wilkins says it took him a while to get over not making the NBA’s 50th Anniversary Team.

Don’t get it twisted, the temptation to open up a few spots for more recent NBA stars was powerful. Limiting one’s ballot to an average of one legend for every year of the NBA’s existence, the same rate set 25 years ago, was daunting.

Note: One thing I wasn’t going to indulge was any impossible projections on who could star in whom’s era. West, the Lakers legend who remains very active in NBA business at age 83, often has said the old-schoolers would do just fine today, benefiting from the advancements in training, nutrition and sports medicine. Modern players, meanwhile, might get derailed playing through commercial air travel, three-games-in-three-nights, non-guaranteed five-figure salaries, different rules, cold cramped locker rooms, pockmarked courts and an overall absence of coddling.

So bottom line, nobody got disenshrined. I respected the Top 50, added two – Dominique Wilkins and Bob McAdoo – whom I considered oversights from that group, then rounded up 23 more. Most of them were easy, but allocating the final three or four spots among 15 or 20 remaining  candidates got kind of dizzying, to be honest.

In the end, 73 of the 75 players for whom I voted made the 75th Anniversary team. The two on my ballot who missed: Dwight Howard and Pau Gasol. That’s a .973 average, better than my success rate at pretty much anything else I’ve tried in life.

To the players who missed this time, I’d remind them there’s always 2046. To the voters for that centennial team, I can only say, good luck. And make sure your VTOL flying car isn’t hover-parked in a legend’s air space.