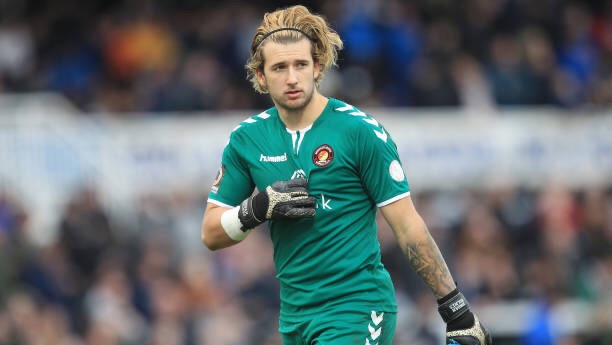 He signed with the academy of Bournemouth, rose through the club’s academy and learned off the likes of Artur Boruc and Adam Federici.

He was a regular part of the first-team set-up, even sitting on the bench for a Premier League fixture against Manchester United at Old Trafford.

Along the way he represented Australia at Under-20 and Under-23 level, spending six years with the Cherries before eventually going on to spells in Scotland and in the lower English leagues. Now, with an Olympics also under his belt, the goalkeeper has returned home to experience the A-League and take his career to new levels.

“It’s surreal. I didn’t think I would ever find myself playing anywhere other than in the UK after being over there for so long,” Holmes, now 24, admitted to FTBL.

“But as soon as a few A-league clubs were interested in me I was very open to it, and when Warren Moon and the club expressed their interest I couldn’t say no to the deal they had.

“It fit in really well with me. I just want to do really well this season and play lots of games.”

Holmes has spent the past two Covid-impacted seasons in England with National League South outfit Ebbsfleet United. After eight years in the UK the appeal to come back to his homeland, and get regular game-time in the A-League, was strong.

“The appeal is the lifestyle here, the weather, I’m living on the Gold Coast,” he said.

“Playing back home and being closer to family and friends after so long away. And also hopefully game-time, I want to be playing as much as I can. And I feel like this is the next best step in my career.

“I’d like to play every game, but obviously between me and Macklin it will be a good battle to see where we both stand. At the end of the day if he plays or I play I will be very happy for both of us, as long one of us does well it doesn’t matter who’s playing.

Holmes will be battling it out for the starting spot at Brisbane with 22-year-old Macklin Freke, after the departure of Jamie Young to Western United.

“Macklin is a great guy and a great goalkeeper as well,” the Sydneysider said.

“Whichever way they go between Macklin and myself we’ll both support each other 100% and if we can get wins and either us is playing well then we’ve got the full backing and support of each other, so that’s always a good thing.”

Holmes started his career with Rockdale City Suns and Sydney United 58 before his move to England. The shot-stopper says the goal at the Roar this season is to make the top six, but believes the young Brisbane squad can surprise a few and could even go further.

“The goal for the season is probably to be honest finals football, that’s what we’re all looking to,” he said.

“We’d love to win the league, but it’s going to be a tough league this season with a lot of good players and good teams around. But we want finals football and to give ourselves a chance of silverware at the end of the season would be a great achievement for this group.

“We obviously want to challenge for the title and that’s every club’s aspiration, but we’ll take each game as it comes. We’re not going to look at it and think if we’ve won the first two games then we’re going to win the title – no it’s probably not going to be like that.

“But if we can get off to a good start and we can play our best football, then at the end of the day it doesn’t matter if we get on the wrong side or the right side of the results, as long as we’re playing to the best of our ability.

“If we play to the best of our ability I can’t see why we can’t have a red hot go at the title.”