Villanova opens at No. 4 in AP preseason college basketball poll – The Philadelphia Inquirer

Villanova opens at No. 4 in AP preseason college… 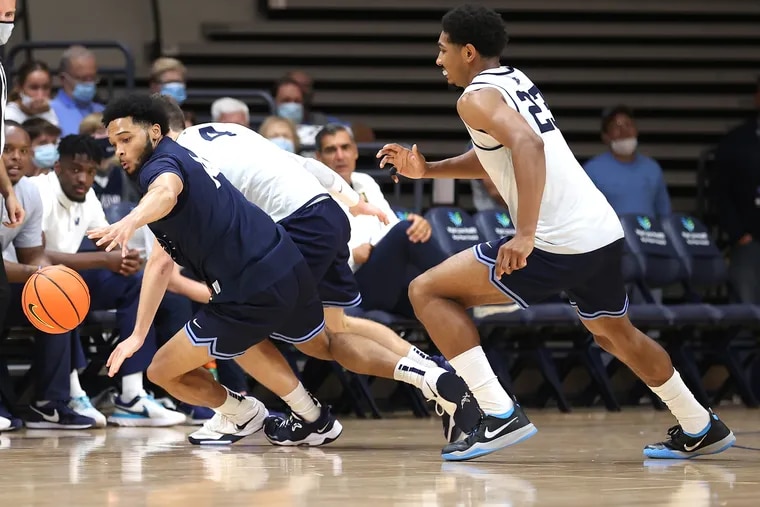 Villanova, which returns four starters from the team that advanced to the Sweet 16 of the NCAA Tournament last season, was ranked No. 4 in the Associated Press preseason top 25 men’s basketball poll released Monday.

The Wildcats, who welcome back veteran starters Collin Gillespie and Jermaine Samuels for a fifth season allowed by the NCAA because of the pandemic, trailed only No. 1 Gonzaga, No. 2 UCLA and No. 3 Kansas in the initial poll of media members.

The Cats’ two other returning starters are guards Justin Moore and Caleb Daniels.

This marks the seventh consecutive year that Villanova has been ranked in the top 10 of the preseason AP poll. The Cats began the 2020-21 season ranked third. Their championship teams of 2016 and 2018 stood at No. 8 and No. 6, respectively, in the first rankings.

The Wildcats lost only Jeremiah Robinson-Earl from their 2020-21 team that finished 18-7 and captured the Big East regular-season crown for the sixth time in the last seven seasons. Villanova won two games in the NCAA Tournament before losing, 62-51, in the Sweet 16 to Baylor, the eventual national champion.

The Cats will play four ranked teams in their nonconference schedule, beginning with UCLA on Nov. 12 in Los Angeles. Their other meetings will be against No. 18 Tennessee on Nov. 20, either No. 7 Purdue or No. 18 North Carolina on Nov. 21, and No. 8 Baylor on Dec. 12.

Gillespie was one of 20 players named to the watch list for the Bob Cousy point guard of the year award presented by the Naismith Memorial Basketball Hall of Fame.

Gillespie averaged 14.0 points and 4.6 assists in 20 games last year before being sidelined in March with a torn medial collateral ligament in his left knee, and was cleared in August to return to action. He also was nominated for the Cousy award at the start of last season.

Also named to the watch list was Alabama junior Jahvon Quinerly, who began his collegiate career at Villanova but transferred after his 2018-19 freshman season.

Villanova and Rutgers met Sunday at the Wells Fargo Center in a closed competition comprised of a series of controlled scrimmages rather than a regulation 40-minute game.

“We got zone work in, we got press work in, various game situations in,” Wildcats coach Jay Wright said on the program’s website. “It was an extremely competitive scrimmage. I know we learned a lot in this scrimmage and it’s going to help us get better.”