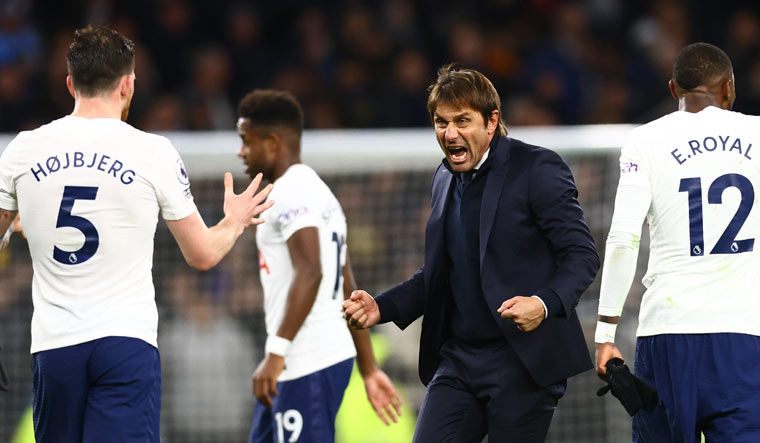 The boos rang out as Tottenham’s players left the field after going a sixth straight half of play in the Premier League without a shot on target.

His team trailing 1-0 and being outplayed at home by an injury-hit Leeds, it likely dawned on Antonio Conte that he had a bigger job on his hands at Tottenham than he might have imagined.

The Italian’s halftime team talk made all the difference.

Tottenham came out with much more intensity and delivered a second-half performance more in its new manager’s image as goals by two unlikely sources—Pierre-Emile Hjbjerg and Sergio Reguilon—secured a 2-1 win on Sunday.

In the earlier game, Manchester City swept past Everton 3-0 to move back to second place, three points behind Chelsea.

It was a first league win under Conte since the Italian replaced Nuno Espirito Santo as Tottenham manager before the international break. His renowned passion was evident in the final minutes as he whirled his arms, urging fans to get behind the players to see out the victory.

They did, and Spurs climbed to seventh place—above Manchester United, which plunged even lower in the standings on the day it fired manager Ole Gunnar Solskjaer after a string of humiliating results.

Conte was once linked with potentially replacing Solskjaer at United but he has ended up at Tottenham and has yet to lose, having started with a win in the Europa Conference League and a 0-0 draw at Everton in the Premier League.

“At halftime, the players showed me they could win this game,” Conte said.

Man City’s main creative threat this season is coming from a defender.

Portugal full-back Joao Cancelo set up five goals in two games for City before the most recent international break and he was at it again against Everton, providing a sumptuous outside-of-the-boot pass for the 44th-minute goal by Raheem Sterling that set up a routine win at Etihad Stadium.

If that got City fans excited, Rodri’s thunderbolt from 30 meters (yards) in the 55th was another moment to get them off their seats. Bernardo Silva added a third goal in the 86th.

It was a solid response by City to big wins by title rivals Chelsea (3-0 at Leicester) and Liverpool (4-0 at home to Arsenal) on Saturday and achieved without key players like Ruben Dias, who was rested, and Kevin De Bruyne, who is isolating after contracting the coronavirus.

Real Madrid kept its momentum from before the international break by winning its fourth game in a row and getting back to the top of the Spanish league.

Madrid cruised to a 4-1 win over 10-man Granada on Sunday after dominating from the start to reclaim first place.

Marco Asensio, Nacho Fernandez, Vinicius Junior and Ferland Mendy all scored to give Madrid its fourth straight victory in all competitions.

Carlo Ancelotti’s team reached 30 points from 13 league matches, one more point than Real Sociedad, which was held to a 0-0 draw at home against Valencia. Madrid is two points in front of Sevilla, which drew 2-2 at home against Alavs on Saturday.

Granada played a man down from the 67th as midfielder Ramn Rodrguez was sent off for a hard sliding tackle on Vinicius Junior. Granada coach Robert Moreno was later sent off for complaining.

The victory extended Madrid’s unbeaten streak to seven matches in all competitions ahead of its Champions League visit to Sheriff on Wednesday.

Ancelotti took some of his key players out of the match in the second half to give them some extra rest, including Luka Modric, Karim Benzema, Vinicius Junior and Toni Kroos.

It was the 13th straight league win by Madrid over Granada, which has won only two of its 13 league matches this season. It sits in 17th place with 11 points, inside the relegation zone.

Asensio put Madrid ahead from inside the area in the 19th minute after a pass by Kroos, who also set up Nacho’s goal in the 25th. Vinicius Junior added to the lead after passes by Benzema and Modric in the 56th, and Ferland Mendy closed the scoring from inside the area after an assist by Casemiro in the 76th.

Granada’s lone goal came in the 34th when a low shot by forward Luis Suarez from outside the area deflected off Nacho before going in.

Ancelotti was without Gareth Bale and Eden Hazard after they returned from the international break with health issues. Bale hurt a leg muscle with Wales, while Hazard had a stomach virus.

Sociedad missed its chance to take over the league lead after a home draw against Valencia, a result that extended its unbeaten streak to 17 matches in all competitions.

The hosts were reduced to 10 players in the 76th because of a red card for defender Aritz Elustondo.

Sociedad’s only loss this season came in its opener at Barcelona in August.

Serie A leader Napoli lost for the first time this season as Inter Milan reinvigorated its Italian title bid with a 3-2 win on Sunday.

Inter, the defending champion, cut the gap on Napoli and AC Milan to four points after 13 rounds and ended Napoli’s status as the last remaining unbeaten team across Europe’s five major leagues.

Dries Mertens, who had set up a pulsating finale with his club-record 137th goal for Napoli, missed the chance to equalize in injury time when he blazed his shot over.

It was a very tactical match and we could have drawn it in the end, said Napoli coach Luciano Spalletti on his first return to the San Siro in Milan since he was fired by Inter after finishing fourth in 2019.

It was another Argentine who scored the winning goal. Lautaro Martnez scored Inter’s third on a counterattack in the 61st minute, set up by compatriot Joaquin Correa.

Inter goalkeeper Samir Handanovic preserved the result with a brilliant save to deny Mario Rui in injury time, forcing the ball onto the crossbar, before Mertens’ miss.

The visitors had struck first in the 17th when Piotr Zielinski won the ball off Nicolo Barella and ran forward to score from Lorenzo Insigne’s pass.

Hakan Calhanoglu equalised with a penalty in the 25th, awarded after Kalidou Koulibaly was penalized through VAR for hand ball, and Ivan Periic headed Inter’s second before the break.

There was a lengthy delay early in the second-half following a clash of heads between Napoli’s Victor Osimhen and Inter’s Milan Skriniar. Osimhen was unable to continue and went off with what looked a cheekbone injury.

Martnez scored but Mertens ensured a lively finale when he pulled one back in the 78th with a brilliant shot under the crossbar.

There was another holdup for another clash of heads, between Ospina and Inter striker Edin Deko. Both continued with bandaged heads to see the late drama.